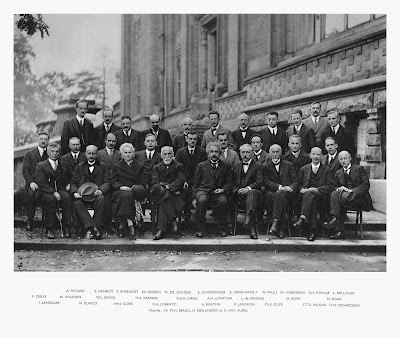 This photograph of those gathered at the fifth Solvay conference on ‘Electrons and Photons’, held in Brussels from 24 to 29 October 1927, encapsulates the story of the most dramatic period in the history of physics. With seventeen of the twenty-nine invited eventually earning a Nobel Prize, the conference was one of the most spectacular meetings of minds ever held. It marked the end of a golden age of physics, an era of scientific creativity unparalleled since the scientific revolution in the seventeenth century led by Galileo and Newton.

Eight men and one woman are seated in the front row, six have Nobel Prizes in either physics or chemistry. The woman has two, one for physics awarded in 1903 and another for chemistry in 1911. Her name: Marie Curie. It was Max Planck, sitting on Curie's right, holding his hat and cigar, who discovered the quantum.

In the centre, the place of honour, sits another Nobel laureate, the most celebrated scientist since the age of Newton: Albert Einstein. Looking straight ahead, gripping the chair with his right hand, he seems ill at ease. Is it the winged collar and tie that are causing him discomfort, or what he has heard during the preceding week? At the end of the second row, on the right, is Niels Bohr looking relaxed with a half-whimsical smile. It had been a good conference for him. Nevertheless, Bohr would be returning to Denmark disappointed that he had failed to convince Einstein to adopt his Copenhagen interpretation of what quantum mechanics revealed about the nature of reality.

Instead of yielding, Einstein had spent the week attempting to show that quantum mechanics was inconsistent, that Bohr’s Copenhagen interpretation was flawed. Einstein said years later that ‘this theory reminds me a little of the system of delusions of an exceedingly intelligent paranoic, concocted of incoherent elements of thoughts’.