A Review of the Spanish edition of Quantum 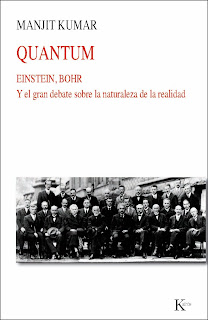 You can read an extract in Spanish here.
Translation to follow once I can convince a Spanish speaker to translate...
1 comment:

James Hannam, author of God's Philosophers: How the Medieval World Laid the Foundations of Modern Science reviewed Quantum on his blog - Quodlibeta. I've taken the liberty of reproducing it below:

'Manjit Kumar’s book Quantum: Einstein, Bohr and the Great Debate about the Nature of Reality is a difficult project triumphantly accomplished. In popular history of science, the aim is to mould the history and the science together without compromising too much on either. When the science in question is quantum mechanics, an author already has his work cut out trying to explain it to the general reader. Another challenge is that the history of the quantum is about a clash of personalities and philosophical viewpoints. Turning that into a readable story is no mean feat. But Kumar has succeeded on both fronts.

The debate at the heart of Quantum is how to interpret the strange physics of the sub-atomic world. On one side was Albert Einstein. Despite the difficulty many of us have with relativity, it is actually a well-behaved physical theory that does not require us to compromise on the basic concepts of objective reality or cause and effect. Quantum mechanics, on the other hand, disposes of such foundations: it is a subjective realm where the observer appears to affect the result of experiments and where randomness is indelibly built in. Einstein could never accept this. He thought there were “hidden variables” behind quantum mechanics that would transmute it into a deterministic theory. “God does not play dice”, he said many times.

The other side of the argument was led by Niels Bohr, the greatest Dane since Tycho Brahe. Bohr developed the Copenhagen interpretation of the quantum which embraced its strangest aspects. Bohr accepted that the motion of sub-atomic particles can only be predicted as probabilities and that the experimenter is part of the same system as the thing being observed. Einstein set Bohr a number of fiendish puzzles to show that quantum mechanics was inconsistent and so incomplete. But every time, Bohr solved the problem. Eventually, after Einstein’s death, the Irish physicist John Stewart Bell developed a way to experimentally test one of the quantum paradoxes called non-locality. But, to date, the theory appears to pass even this trial.

All this has left science with a massive hangover. It is not as widely appreciated as it should be that the two crowning achievements of modern physics, relativity and quantum mechanics, are completely incompatible. It is not just that they give different results. They inhabit different metaphysical universes. Scientists have tended to assume that quantum mechanics is the more fundamental theory and string theory is an attempt, unsuccessful so far, to combine it with relativity.

I have a suspicion that current crisis in physics is a function of abandoning the metaphysical framework of a deterministic and objective universe. String theory has returned to the failed ancient Greek model of pure rationalism where clever ideas can never be tested. In the meantime, anyone who wants to understand the background to the The Trouble with Physics chronicled by Lee Smolin can do no better than to read Manjit Kumar’s Quantum.

If you haven't read James's book, check it out. It was shortlisted in 2010 for the Royal Society Science Book Prize.
No comments:

'a brilliant history of quantum theory'

A review of Quantum by Paul Thomas on the Freedom in a Puritan Age website:

'Quantum mechanics is both one of the most important scientific theories of the twentieth century and one of the least understood, admittedly even by physicists themselves. Quantum theory challenges both the laws of ‘classical physics’ and throws up philosophical questions about our ability to truly understand, not just the microphysical world of the atom, but the everyday, macrophysical world which we inhabit.

In telling the story of quantum theory, Kumar has written a fascinating narrative history that interweaves scientific theory and individual biography against the background of broader historical events.

Kumar introduces us to not just the main adversaries around whom the debate over quantum theory revolves — Albert Einstein and Niels Bohr — but a supplementary cast of some of the greatest scientific minds of the twentieth-century: the conservative patriarch of modern science, Max Plank; charismatic New Zealander, Ernest Rutherford; dogmatic quantum theorists Werner Karl Heisenberg and Max Born; the ‘shy’ Paul Dirac; Wolfgang Pauli, known as “The Wrath of God” for his critical mind; the ‘scandalous’ (and sometime alley of Einstein) Erwin Schrodinger; and post-WWII Irish scientist John Bell, who came up with a famous theorem to test Einstein and Bohr’s positions. At the heart of the book though is Einstein, the most famous scientist in history, the man whose name has become a synonym for ‘genius’, and whose continued questioning of a theory he had helped initiate saw him become an increasingly isolated and discredited figure.

Quantum theory begins in 1900 with Max Planck’s discovery that the energy of light and all other forms of electromagnetic radiation could only be emitted or absorbed by matter in ‘bits’, bundled up in various sizes; ‘quantum’ being the name he gave these individual packets of energy. As Kumar says, this was a radical break from the long held belief that energy was emitted and absorbed continuously. For Planck, the quantising of energy was a pragmatic solution to another problem that he thought he would get rid of in time.

Einstein saw the revolutionary and ‘heretical’ potential of Planck’s temporary expedient. In 1905, Einstein published four papers that would eventually launch him to international stardom, including his special theory of relativity. But it was the first of these papers, in which he put forward the theory that light was made up of particle-like quanta or photons (as they were later called), that Einstein considered the most important.

In 1913, the young Bohr applied Einstein’s light-quanta theory to the electrons within an atom and their ability to emit or absorb energy; but in doing so, he violated certain tenets of accepted physics, leaving what happens within the atom completely to chance. For Einstein, it was as if one were to let go of an apple, but instead of it falling to the ground it was suspended for some unspecified length of time, before shooting off in some undetermined direction.

Nevertheless, as with Planck and his original ‘bundles’ of energy, Einstein was prepared to abandon the ‘causality’ of classical physics and tolerate random ‘probability’ for the time being, in the hope it would be removed with further scientific developments.

By the mid-1920s, however, Einstein had grown uneasy with the very probability he had introduced into the atom. It was in writing to Max Born about his theory in 1926 that Einstein expressed his growing disquiet about quantum mechanics, and in which he first uttered his famous remark that ‘God is not playing dice’. Nevertheless, he had been the unwitting inspiration for one of the greatest developments in the understanding of the quantum: Heisenberg’s uncertainty principle.

Heisenberg had discovered that quantum mechanics forbids the precise determination of both the position and the momentum of a particle at any given moment. The more accurately the one is measured, the less accurately the other can be known or predicted, as any attempt to measure an electron automatically interferes with its trajectory. As such, for the likes of Bohr, Heisenberg, and what became known as the Copenhagen school of quantum mechanics, there can be no such thing as a quantum reality free from observation. An electron simply does not exist at any place until a measurement is performed to locate it. It is the act of observation that makes ‘real’.

For Einstein, and a few like Schrodinger, there must be an objective reality free from observation and accessible to human reason. This isn’t just a scientific question, but a philosophical one. The belief that there is no such thing as an observer-free objective reality in the atomic realm affects what we can say about nature in general and, for Einstein, risks reducing science to ‘uninspired empiricism’. However, although this is ‘the great debate about the nature of reality’ to which Kumar refers, this is an argument that is never fully had-out between the main protagonists; as Bohr, unlike Einstein, is clearly not keen to step outside the uncertainty of the subatomic realm and into a real-world philosophical debate.

Amongst the strengths of Kumar’s account is placing these debates within their historical context. The uncertainty at the heart of quantum physics reflected the uncertainty of the inter-war years, which eventually saw Einstein emigrate to the United States, and brought an end to the international conferences at which these debates took place. But Kumar’s real achievement is to rehabilitate the reputation of the later-Einstein, on whose side you have no doubt Kumar is.

From the beginning Einstein argued that quantum theory was incomplete; yet as its application became increasingly successful, he became marginalised and an almost lone voice against the increasing orthodoxy of the Copenhagen Interpretation. Today, however, many physicists would agree with Einstein that quantum mechanics is an incomplete theory. As Kumar says, although Einstein never managed to deliver a decisive blow in his encounters with Bohr, his challenge was sustained and thought provoking:

“Einstein never put forward an interpretation of his own, because he was not trying to shape his philosophy to fit a physical theory. Instead he used his belief in an observer-independent reality to assess quantum mechanics and found the theory wanting.”

Kumar has written a brilliant history of quantum theory from its origins to the present; capturing, in particular, the excitement of the interwar years as the greatest scientific minds of the twentieth-century criss-crossed Europe, between conferences and university departments, meeting in train stations to snatch every opportunity to discuss the latest theories. Quantum evokes that world and takes you into those complex debates, without distracting from a fascinating story.'
No comments: