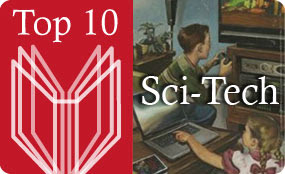 Quantum chosen as one of the top ten science and technology books of the year by Booklist. They say: 'Kumar illuminates a pivotal episode––Bohr’s triumph over Einstein in their debate over quantum physics––in an accessible and dramatic mix of biography, history, and science.' See the full list here.
No comments:

Amazon Reader's Review: 'Feeds the brain and the heart'

Steve from Cardiff had this to say about Quantum on amazon.co.uk:

'Like a good novel, this kept me gripped to the very end thanks to a perfect balance between hard science and human interest. The first thing you notice about the book is the detail. Copiously researched, Kumar has pulled together a truly impressive array of material, both personal and professional, constructing a rich history that transports you to the subject's golden age and to the lives of the key players. He tells a story so engrossing and so detailed that I felt surprisingly moved towards the end. Yes, by a book on quantum theory.

In terms of the science, there are some first-class explanations from blackbody radiation and the photoelectric effect through to EPR and Bell's Theorem, with 30+ pages of end notes. Although the history is structured around the debate between Einstein and Bohr, other key players are afforded considerable coverage - not just the obvious ones like Planck, Rutherford, Heisenberg, Schrödinger, de Broglie and Born, but also (and to his credit) some of the lesser known figures - Sommerfeld, Uhlenbeck, Compton - whose crucial contributions to the field frequently go unmentioned in books and articles on this subject.

The great debate itself is a tremendously invigorating one. Both Einstein and Bohr agreed that quantum mechanics was correct. Where they disagreed was in whether or not it was complete. In fact the implications of this disagreement went deeper, calling into question the fundamental role of physics itself, and whether there is even such a thing to be measured as an independent objective reality. On this, the author's background in physics and philosophy are put to good use. Overall then, this is a captivating fusion of science, history, philosophy and biography, and a great way to feed the heart and the brain.'
No comments: